With myself regarding my western writing - http://lauriepowerswildwest.blogspot.com/2009/09/tarnished-interview-with-gary-dobbs.html
Posted by Gary Dobbs/Jack Martin at 9:14 AM 2 comments: 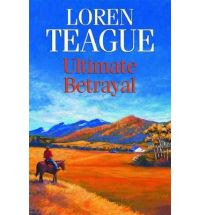 Ultimate Betrayal by Loren Teague is a story of intrigue and deception set against the dramatic scenery of New Zealand's high country and the rolling green hills of Ireland.
In this page-turning mystery, IRA terrorists, the Irish Police, New Zealand Immigration and MI5 all have a significant role to play.

When Katrina Jones flies from Boston to New Zealand in search of an old friend, she sets off a chain reaction. But the secret which Sean McKinlay carries cannot be resolved until the pair retrace their footsteps to where the story began – Ireland.
I stayed up until 1.30 am last night to finish the book – what more can I say!

Ultimate Betrayal is Loren’s second novel with Hale Books and is available from The Book Depository – world-wide postage free.

Note: Ultimate Betrayal was published in March but due to ill health, Loren has been unable to post anything about it. In an email I received from her today, she says, 'I am getting there again!'
Best wishes to you, Loren.
Marg
Posted by M. C. Muir at 5:07 AM 9 comments: