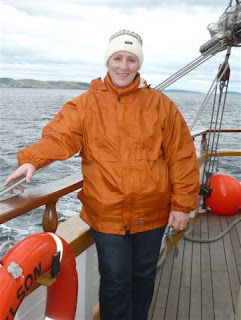 Astrodene's Historic Naval Fiction is pleased to have obtained an interview with Margaret Muir, author of FLOATING GOLD which will be released on 31 May 2010 and is already available for pre-order.
I am sure you will find some of the answers very intersting.

What can you tell us about FLOATING GOLD, without spoiling the plot for readers?

The year is 1802 and Captain Oliver Quintrell is frustrated at being land-locked. However, when he is granted a commission, he is cynical that his vessel is a mere frigate. But Elusive is a sound ship and with a seemingly loyal crew he sails from Portsmouth. On entering the tropics, he discovers the purpose of his cruise and from Rio he heads south into the inhospitable waters of the high latitudes beyond Cape Horn.
But the secret orders he has been entrusted with are veiled in mystery and the chances of success seem near impossible. Murder, treason, enemy ships, ice, and the near loss of his ship are but some of the problems to confront him. His mission is to retrieve a valuable cargo and return it to England and Captain Quintrell intends to succeed no matter what the cost.

What made you decide to write your first book in the historic naval fiction genre?

Several things. My love of the Horatio Hornblower series. Inspiration after stepping aboard HMS Victory in Portsmouth. Experiences at sea sailing aboard replica vessels such as Captain Cook's HM Brig Endeavour and the tiny Colonial Brig Lady Nelson. Several voyages on a sail training vessel and a voyage across the Atlantic in a (latter day) barquentine.

What things in particular inspired you to write this book?

Two things. Firstly a visit to the Antarctic Peninsula a few years ago – what a remarkably unforgettable place that is! And secondly reading an article about a lump of ambergris being found on a beach in South Australia.

How did you undertake your research for the book?

My research is mainly through reading, but not fiction (that came earlier). And I tend to read factual seafaring accounts such as Cordingley’s, Billy Ruffian, Taylor’s, The Caliban Shore, Bergreen’s, Over the Edge of the World, besides reference books such as Goodwin’s, Nelson’s Men o’ War and similar. I read almost anything which is related to the days of wooden sailing ships. Obviously I also use the internet and where possible view primary source material of ships’ logs, reports or personal letters.

Where did your interest in the sea originate?

I don’t know. Perhaps from a model fully rigged wooden sailing ship which always graced the sideboard when I was growing up.
Then in the late 1990s I took my first tall-ship sailing adventure – a 12 day voyage as trainee crew on a barquentine, STS Leeuwin. Sitting on deck on bow watch one night while in the Indian Ocean, I was amazed to see the marine luminescent particles sparkling in the bow wave. At the time I didn’t know what this phenomenon was. I called these flashes of light illusive diamonds (they reminded me of the illusionist’s magic dust) and Illusive Diamonds was the proposed title for my first book. I was later advised that title would never sell so I changed it to Sea Dust which is less inspiring but possibly more marketable.

What drew you to write your first novel?

As I said, my first novel, Sea Dust (2005) was a sea story – a historical fiction story with a female protagonist. Set in 1856 in Whitby, Yorkshire it tells the tale of a young woman who escapes from England by stowing away on a cargo vessel and sailing to Australia. In retrospect, I think the story epitomises my own fantasies to run away. (I did leave Yorkshire many years ago and emigrated to Australia but my passage was on a Boeing 707)

Do you plan your stories before starting to write?

No. I don’t have a pre-conceived plot. If a particular setting or a person or action grabs me, that is where I begin and I let it flow from there. Sometimes the idea I come up with might be midway through the story (as with Sea Dust onboard ship). I then have to thread a beginning to it. Sometimes the most amazing things crop up as the story progresses which surprises even me.

Are your books available?

My previous four titles are available in Large Print only as they never went into paperback after the hardback edition sold out. The Condor’s Feather (2009) – an equestrian adventure set in Patagonia – is still available from on-line bookshops in hardback. FLOATING GOLD can be ordered on-line from The Book Depository, Hale Books or any on-line bookstore.

What intrigues you about the period in which the book is set?

I love the sense of adventure, heroes, challenges, hubris, courage, loyalty, tenacity and ingenuity; of man against man, and man against the elements.

Are you planning to write further naval fiction books set in the age of sail?

I had started writing the sequel to FLOATING GOLD, before I got sidetracked on a book about Tasmanian bushrangers. To complicate matters further, this year I embarked on more university studies. However if FLOATING GOLD is well received there will certainly be a sequel. Originally I had plans for a series of sequels and possibly a prequel.

Writing is a lonely experience and authors get little feedback about their work - either good or bad. Without any follow up it’s hard to know what readers really want. I’m always happy to take on board any comments, feedback, suggestions or offers from publishers to take up the paperback rights.

My thanks to the Historic Naval Fiction Blog for this interview.

To read more about the book, go to www.squidoo.com/floatinggold