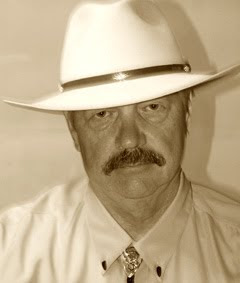 Just a quick note to everyone at the Hale authors' blog. I'm Charles Whipple, a resident of Japan, and a Black Horse Western author since Vulture Gold was published in 2005 (as I remember). Since then, Revenge at Wolf Mountain, Trail of a Hard Man, and Guns of Ponderosa have been published. The Killing Trail stands in the wings with Hell Fire in Paradise to follow that. I'm active on the Black Horse Westerns group on Yahoo and belong to Jon Franklin's WriterL list. 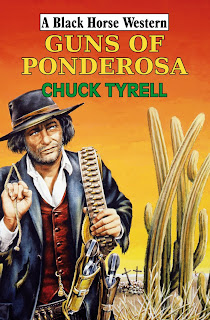 I'm a native of Arizona and grew up there when cowboys were respected and looked up to. My grandfather came to Arizona in 1876 after two years of making charcoal to use in refining silver in Nevada. I rode a horse before I could walk, I think, and a horse was my mode of transportation to my first part-time summer job as well. I milked cows morning and night, took them to pasture, helped brand the calves, and generally grew up as a country bumpkin.

While I love westerns, I'm not an addict. I'm trying to get a gumshoe novel off the ground (it needs major revision right now) and I write quite a bit of non-fiction under my own name, magazine articles and a few books.

It's good to be a part of the Hale Authors Blog. Thanks for the invitation.

You can read my blog on things western here.
Posted by ChuckTyrell at 3:47 AM 4 comments: 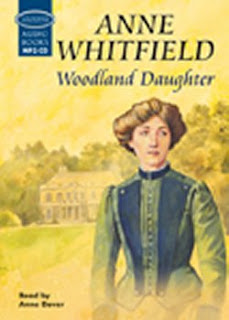 My historical novel Woodland Daughter is now available in audio format such as Mp3 and cds and even cassettes. These can be ordered in by your local library.
The audio book company's website which showcases is http://www.ulverscroft.com/ (you can do a search with my name, etc)
Sadly, I can't get the cover large with it distorting.
blurb;
Throughout her years of devoted service to the Bradburys, Eden Harris has hidden a secret that would affect them all, a secret shared only with her husband, Nathan and her grandfather. But an enemy returns, shattering her world and exposing her secret. Then, robbed of Nathan, she must flee from the country estate. However, her attempt to start anew is not so simple as the past haunts her. Now Eden must gather her strength and look into her heart to accept what the future offers.
Posted by AnneMarie Brear at 2:50 AM 2 comments: 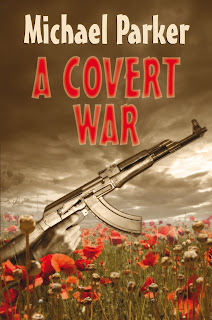 My latest book is due out March 31st. I have already had some lovely comments from family and friends who have read it. But as we all know; as much as we appreciate those comments, we would dearly like to see them translated into sales. Anyway, for your delectation the prologue follows:

I think that was the moment I realised that I was in love with Shakira. I had known her barely three weeks. It probably happened within days of our first meeting at the Mission. Shakira was such a lively, extroverted character; so full of humour and yet with warm simplicity. I felt a connection with her that is difficult to describe, but one I believe was reciprocated. I knew without doubt that Shakira had warmed to me as soon as we met. There was something in her manner; the way she spoke and reacted to me. I can remember how her face would light up as soon as she saw me and how the atmosphere in a room seemed to change when she walked in; such was the effect she had. I felt the change in me and could see it in others. I loved the way she would throw her head back and laugh out loud at my terrible jokes, showing her beautiful, white teeth. And then she would stop laughing and look directly at me, her lovely eyes softening. And as her laughter died away, so her mouth would change into that wonderful, disarming smile of hers.
I had been working at the Mission for a number of weeks, each day writing up my report for The Chapter on the work that the centre was undertaking. Shakira was the senior administrator there. Because of my project I often found myself in Shakira’s company. In the evenings we would walk up to the high point above the Mission and talk over the highs and lows of the day. We would sit on a fallen tree trunk that had been there for many years. It was divested now of its foliage. It had no branches; they had been lopped off so that it could be used to sit and look over the lovely countryside. The view from there down into the valley was charmingly beautiful, particularly as the sun was setting. As we sat together on that log, it was obvious to me that we were getting closer and I felt, instinctively that Shakira welcomed it.
I can remember when I realised I had fallen in love with her. I had told her one of my ludicrous jokes. I can see her now, tossing her head back, her mouth wide open in that delicious laugh. She had thrown her hands up in the air and slapped them down on the tops of her legs. Her red dress, patterned with large, white flowers seemed to dance like fire in front of me. I was mesmerised and happy that I knew I loved her and that she loved me.
And that was the moment the bullet slammed into me. The impact pitched me forward and sent me sprawling at Shakira’s feet. The sound of the gun came moments later. As I hit the ground I blacked out, but it could only have been for a few seconds because when I looked up I saw Shakira’s lovely face turning into an image of shock and pain. The white flowers on her dress began to change colour as her blood seeped into the dress, and she rolled off the log, falling face down on to the hard, stony ground.
I opened my mouth to call out, but no sound came. I felt a terrible pain in my shoulder where the bullet had hit me, but the pain in my heart when I realised Shakira was almost certainly dead and I was probably about to die was unimaginable. It would be true to say that I wanted to die then; life without Shakira would be so empty.
I remember hearing a great deal of shouting and the sound of gunfire coming from below the slope, down at the Mission. I could hear screaming and the sound of men’s voices. Then the gunfire stopped and I heard the thud of footsteps as the attackers ran up the slope towards us. I lowered my head on to the ground and pretended I was dead. I prayed nothing else would happen.
But something else did happen; something even worse. I felt myself shrivel inside with an inordinate fear because I couldn’t close my eyes; I had to keep them open. Several men appeared. They were all wearing camouflage uniforms and calf length boots. Two of the men stopped beside Shakira and said something to each other in a language that I couldn’t understand. One of the men put his boot on Shakira’s body and pushed her. Then he leaned forward and pointed a gun at her head. He said something and shot her. I can see Shakira’s body jumping now. I see it every night in my dreams; in my nightmares.
The killer walked over to me and pointed the gun at my head. I noticed the little finger of his left hand was missing. Why do we remember such trivial things in our darkest moments? Aren’t we supposed to have no recall of events immediately preceding such trauma? Why wasn’t I allowed to have no memory of what happened? I will never forget it. Never. He laughed and said something in English, and then he shot me.
Posted by Michael Parker at 3:32 PM 2 comments:

I received the news from Hale today that my novel, THE THIRD SECRET has been listed in Publishers Weekly in New York. I don't know just how this will affect my sales in America, but it must be good news for Hale to send me a note through the post. Let's hope it's a foot in the door for Michael Parker
Posted by Michael Parker at 1:44 PM 4 comments: 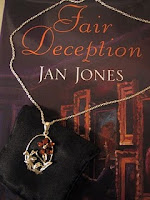 I am getting ridiculously excited about the upcoming Romantic Novelists' Association Pure Passion Awards Lunch on Tuesday. (The pendant is my commemorative present to myself.)

The awards have generated a lot of interest, as part of which Fair Deception (shortlisted for Love Story of the Year) has received a lovely review from SingleTitles .

Jan Jones writes with such verve and gusto that readers will be thoroughly enchanted by her exciting, enthralling and wonderfully engrossing debut historical romance, Fair Deception! Ms. Jones’ love for the Regency period shines in her writing and she manages to make the past come vividly to life without being didactic or overwhelming. A fast-paced romantic adventure that sparkles with atmosphere, danger, drama, humour and passion, Jan Jones’ Fair Deception is a mesmerizing historical romance in the grand tradition of Jane Austen and Georgette Heyer which reader will want to read again and again!

Sold out or not?

When John Hale told me that my novel, THE DEVIL'S TRINTIY (published 2008) had sold out, I got quite excited. But when he told me he wouldn't be printing any more, I was very disappointed and told him so, but there was to be no change of mind on his part. Then last month, Nik Morton told me that the book was being reprinted according to Hale's website. I checked the site and, sure enough, it said 'reprinting'. I figured that this was a 'catch-all' phrase to say there were no more available but they couldn't very well put 'sold out' on the page. So I ordered one from the Book Depository and it turned up yesterday. Tickled pink? You bet. I haven't asked John Hale if the book is actually being reprinted; I'll just walk about with a smile on my face and wait until my statement turns up next month. I'll probably stop smiling then.
Posted by Michael Parker at 9:59 AM 2 comments: