I’ve seen various articles recently about the rise and fall of the e-book, and the return to the top of the pyramid of traditionally published books. Each article presents a reasonable and credible discussion on the merits of each process, and for indie authors of a nervous disposition it means the end is nigh! Apart from the famous and the infamous, to be a successful writer you need a massive slice of luck, and there’s nothing truer than that old saying: luck is when opportunity and preparation come together. How often have you heard someone say that it’s taken them twenty or so years to become an overnight success? And one famous golfer said that the more he practices, the luckier he gets. Napoleon once said ‘I don’t want good generals, I want lucky generals’. But if the luck comes your way, you need to sustain it with a quality product, and for a writer that means talent. I can honestly say that I have never been taught to write: all that happened was that I studied English language from junior school up through senior school, which helped me with my spelling, my grammar and also, if ever I needed it, how to summarise. But probably the one thing that has been a constant guide and a hard learning curve has been rejection. That more than anything helps a writer to produce a story that might be acceptable to a publisher, but it doesn’t teach a writer to write. When my first book was published in 1980 (NORTH SLOPE), it sold 2000 copies in its first year. It didn’t go into paperback, and the following year my publisher dropped me. This was another rejection of course. I published that title last year on Amazon and sold something like 6000 copies in less than six months. But I was riding on the Amazon Kindle revolution which has dropped off dramatically now, and so have my sales. The luck was with me then and I hope it continues, but I have to admit that I’m still working on it, still writing and still trying to promote and market my work. So as the e-book market drops away and it is, believe me, I am back in a parallel, literary world to the one I have inhabited for most of the last thirty years, fighting for recognition. But the big guns are fighting back and restoring the publishing pyramid: big boys on top, bottom feeders at bottom. The difference now of course is that success is down to me and will come depending on how hard I work and how lucky I become. Wish me luck!
Posted by Michael Parker at 5:32 PM No comments:

I’m making good progress with my current mss. Last week I had reached 34000 words. By the weekend I had managed to notch that up to 47000. This puts me about halfway through my planned number of words. If I can keep that kind of progress up, I can expect to complete my first draft by the end of September. However, I think my last week’s output was exceptional, and would only expect to complete about 3 to 4 thousand words a week. We’ll see.
And on the subject of big numbers, or small, depending on which way you want to look at it; I promoted HELL’S GATE on BookBlast yesterday (Sunday), and began a two week run for the title on Indie Authors 99c promotion. My Amazon sales rank for the book rocketed from 504,000 on Saturday to 14,000 today. The graph was almost vertical. I couldn’t believe it. And my overall author rank for ALL books shot up from 73,000 to just over 26,000. Naturally I don’t expect it to last, but its great breathing in some heady atmosphere. This isn’t the first time I’ve promoted this title, but the difference this time is the category into which I placed it. I’ve always referred to it as Historical, where really it should be described as African Colonial History. However, this time I put it in the Action & Adventure category, and that seems to have done the trick.
On the house selling front, we had someone look last week, but got no follow-up, and this morning we had a Dutch client look over the place. He liked it but had others to view. We actually saw him at three other properties on our urbanisation with the Estate Agent, so it’s just a case of being in the mix and keeping our fingers crossed.
Oh, another decision I’ve reached is to put HELL’S GATE on Smashwords. I will not be doing that for a while yet because it is still part of the Kindle Select programme until October 22nd. It’s subjective for me because I can’t expect any significant improvement in sales simply by adding to the other eReader outlets. It won’t do my sales figures any harm though.
Yesterday (Sunday) was a significant day also. I was over at Pilar Christian Fellowship preaching the word. The reason I say it was significant is that I have often been asked to go over to this small fellowship to bring the word, but in October they will be employing a full-time pastor. This means that my services may not be needed again. So yesterday was a kind of farewell day for me and Pat. You can never say never though, and if the good Lord deems it necessary, I will continue in His work for as long as He wants. Maybe we’ll sell the house and I can carry on God’s work in England? Wish me luck!
Posted by Michael Parker at 10:52 AM 1 comment:

Although I write for Hale as Ross Morton, some of you might be interested in my latest release from Crooked Cat Publishing. It highlights aspects about illegal trade in products from endangered species and people smuggling - modern-day slavery.
BLOOD OF THE DRAGON TREES 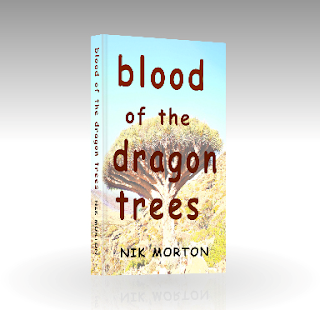 
Laura Reid likes her new job on Tenerife, teaching the Spanish twins Maria and Ricardo Chávez. She certainly doesn’t want to get involved with Andrew Kirby and his pal, Jalbala Emcheta, who work for CITES, tracking down illegal traders in endangered species. Yet she’s undeniably drawn to Andrew, which is complicated, as she’s also attracted to Felipe, the brother of her widower host, Don Alonso.


Felipe’s girlfriend Lola is jealous and Laura is forced to take sides – risking her own life – as she and Andrew uncover the criminal network that not only deals in the products from endangered species, but also thrives on people trafficking. The pair are aided by two Spanish lawmen, Lieutenant Vargas of the Guardia Civil and Ruben Salazar, Inspector Jefe del Grupo de Homicidios de las Canarias.


Very soon betrayal and mortal danger lurk in the shadows, along with the dark deeds of kidnapping and clandestine scuba diving…


This topical thriller is Nik Morton’s 18th published book. It should appeal to anyone interested in Spain, crime thrillers, or romantic adventure!

Last year, over 25,000 elephants were illegally killed for their ivory. – National Geographic, October 2012.


A British woman was arrested in Tenerife for stealing rhino horn from the Offenberg museum. A single horn can fetch £200,000 on the black market. This year 455 white rhinos have already been killed illegally. – The Courier, October 26, 2012.
CITES urges transit and destination countries to take urgent measures to implement their plans by July 2014: http://www.cites.org/eng/news/pr/2013/20130516_elephant_action_plan.php
Posted by Nik Morton at 5:10 PM 1 comment:

I made good progress last week with my book, reaching 34000 words. I also interviewed a friend of mine who worked his entire, professional life in the prison service. He began life as a trainee officer and finished as a Governor (grade 5). I met Dave (Pritchard) and his wife, Rosie at church last year. We got to know them quite well: they attended our church house group and brought a lot to the table, as they say. I had asked Dave earlier if he would let me pick his brains because I needed a fair amount of detail about prisons in UK in the 1980’s, the kind of life prisoners led, what they could or could not do. In fact, anything that would add realism to the section I’m planning for my book. I prepared a list of 60 questions and recorded the whole interview. I could have listened to Dave and his stories much longer than the 2 hours or so that we chatted. I did explain to him that I might only use about 10% of what he told me, but on reflection I think I’ll probably extend it somewhat. It’s usual to offer someone who agrees to be interviewed something in exchange. Dave was quite happy to come across to our place and have lunch with us and spend time in the pool. His wife was good company too for Pat, and I have a small wedge of material that I am dying to get my teeth into. But I have to be patient: my character is only 13 years old at the moment and doesn’t get nicked for a good few years yet.
We said cheerio to our friends, Brian and Pauline who returned to England for good last week. They travelled back by road with their dog, finally arriving at their new home in Lincolnshire on Friday. We’ll miss them. They lived a couple of hours away from us and we used to visit them on a regular basis. They would come up to us too. The beauty of it was we could have our dogs with us: no need to worry about having them put in kennels or getting a dog-sitter in. But life goes on and we are hoping to sell up soon for our move back to UK. Meanwhile I’ll carry on writing and hoping to finish my book by the end of the year. Wish me luck!
Posted by Michael Parker at 6:32 PM No comments: