Not Quite an Ordinary Week

The week went well, but not much to talk about really. I completed the re-edit of my manuscript and signed the agreement with my publisher. Now it’s a waiting game. Sometime in the New Year I will receive a PDF galley proof for PAST IMPERFECT, and hopefully there will be nothing for me to add other than a dedication etc. I get a good feeling out of this; knowing another hardback of mine is on its way. I know it won’t rock the literary world, but there are a lot of library readers out there who read my books and, hopefully, look forward to the next one. This time though, they’re in for a surprise, and I suppose I ought to apologize beforehand because Past Imperfect is not a thriller: it’s a romance with a rough edged back story. There are elements in it that could satisfy some of my readers like murder, mystery, sadness, joy: all the ingredients of a novel to curl up with at bed-time. But now the romance is out of my system, it’s time to think of my next book; and I expect I will be going back to the thriller genre no doubt.
I’ve made a start on clearing out my room. It’s where I write, play my keyboard and generally run that side of the house that my wife leaves to me: finance, bills etc. The room is a bedroom but will be left empty when we sell the house. It will be the only room to be left that way because our buyers want almost all of our furniture. Isn’t it amazing how much stuff you can accumulate over the years? Because we do not have to move out until the end of March, it gives us time to plan our move in relative calm. The only black spot of the horizon is the possible treatment for my Lymphoma. I will be getting the blood test results tomorrow and no doubt will know what to expect and for how long.
I’ve been keeping an eye on the sales figures for NORTH SLOPE. I use NovelRank for this, which is not entirely accurate, but the signs are encouraging. My promotion with BookBub ended November 1st, but since then the book has continued selling. It isn’t breaking records, but compared to usual month on month sales, the figures have increased by a substantial margin. It encourages me to consider another BookBub promotion in the New Year. It has also given a fillip to my other titles. This is what I need to increase my readership. Apart from a lucky break on Amazon, the only way for a writer to become established is to build a flank of readers who like the work and are prepared to recommend it to others. It’s a slow process, but one that will come if the product is good, which I believe mine is. Wish me luck!
Posted by Michael Parker at 2:16 PM 1 comment:

I'm pleased to announce that the Large Print version of Old Guns is now published.

Sam Ransom, broadsided by the death of his old partner Abner, learns of a note left by the dead man – warning that the infamous Meak twins are after Ransom’s life because of what happened at Bur Oak Springs over two decades ago. Ransom knows he must alert the rest of his gang, who were there at the time. His family is in jeopardy and their only hope of salvation is the gang’s return to confront the Meak brothers… 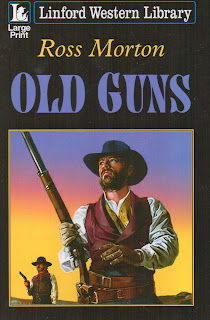 The old guns find themselves up against young guns. It’s a classic situation, where the past returns to not only haunt the hero, but to threaten disaster and death. While the story is set in July 1892 and spans a period of twenty-one days, it harks back to 1859 and also 1866.
An excerpt from the book, plus the original hardback cover can be found at this blog:

Posted by Nik Morton at 2:50 PM No comments:

How time flies: November already and Christmas round the corner. We bought our first Christmas present today: something for our great-grandson, Harrison. He lives in Cyprus with his mum and dad, but will be in England this month for a couple of weeks. More photos for Facebook!
I’ve finished cutting the word-count on manuscript for my publisher: managed to get it down to the required notional count of 110,000 words. Now I have to read it through just to make sure I haven’t left any ‘holes’ there or doubled up on sentences. I suppose most writers are the same: the novel looks brilliant until you been through it several times. But no matter: if I expect efficiency from others in the profession, I have to be prepared to work at it myself.
The BookBub promotion for my novel, NORTH SLOPE looks to have been successful. Although I don’t have access to the sales figures yet, I do know that I passed the 1000 sales figure within 48 hours, and have seen the “guesstimates” on novel rank showing increasing sales throughout the week. The promotion ended last Friday and I’m still selling. I had planned to put the price back up to $2.99 (it’s currently $0.99), but will wait a while until I see a fall off. My main aim was to cover my investment ($360) and get more readers, and I have achieved that. I even attracted a sales pitch from someone who tried to interest me in a promotion with no ‘upfront’ costs. Goes with the territory I suppose. I’ve also noticed a lift in sales of my other titles: nothing dramatic, but an overall improvement on September’s figures. Now, of course, I have to think of ways to keep that going. I’m not planning another promotion for a while, but I will probably try to come up with something in the run-up to Christmas. Any ideas out there?
So what now for this writer? A trip to the hospital next week to find out what’s in store with regard to my Lymphoma is next, but before that I will spend time reading my MS, learning more about nutritional foods and keeping faith with God to bring me through.
Posted by Michael Parker at 2:08 PM No comments: