Like Nicola, I enjoy slipping references into my stories. If people spot them, that really delights me. Currently, I'm writing a story set in Brighton in 1814. The Prince Regent holds an evening party at his Pavilion. In real life, if a possibility offered, he would entice a pretty young woman into a quiet room for a bit of dalliance. So in my story he plans to be alone with the heroine. To thwart him, Giles [the hero], places his friend, Ned, in the library. Only... Ned is a poet.

Behind him, he heard a footman yawn. A glance at one of the ornate clocks told him it was very late. There were only a few people left but Ned had still not appeared. Giles found him in the dimly lit library, deep in a book he had taken from the shelves.
'Nothing happened,' he assured Giles, when the latter had succeeded in rousing him from his story. 'Is it time to leave? Pity. This is a damned interesting tale.'
'So I see,' replied Giles caustically, 'Devil take it, Ned, there could have been an orgy in here and you would not have noticed.'

The 'interesting book' is a story by Jane Austen. The Prince Regent was a great fan and kept copies of her books in all his residences.
Posted by Beth Elliott at 10:13 PM No comments:

Because my books tend to have a lot of humour in them, I thought readers might be interested to hear about the little secret references that I sneak into the text!

Something I very much enjoy when I’m reading a novel is spotting little in-jokes and references to other aspects of life. Lindsey Davis does this particularly well in her novels featuring Marcus Didius Falco, the Roman detective and I’ve never forgotten yelling with laughter when I spotted Falco turning down a job offer from some Hebrew slaves who were building the Colosseum. They wanted him to go on a raid in search of The Lost Ark!

Because I find this so much fun I decided to slip in some odd references into my own books. So far, nobody has commented on the allusion to Cold Comfort Farm, in Scuba Dancing, though the use of a phrase from the Chalet School books has been picked up.

In the first of my Victorian mystery series, Murder Most Welcome, I nailed my colours to the mast (so to speak) by calling a main character, Mr Knightley, and keeping a Jane Austen theme running through the book, as the heroine, Charlotte Richmond, is (like me) an Austen devotee. There are also references to places in Hampshire, where the book is set, and local readers have told me what fun it is to watch out for these.

The latest book, Death is the Cure, (number two in the Victorian series) has some Austen mentions as befits a novel in which the heroine sets off to Bath with a friend who is taking the Cure. However, nobody so far has spotted that a famous fictional female turns up in the book, as does an equally famous, but real, historical gentleman.

Borrowing again from Lindsey Davis, I use the slightly archaic device of having a Dramatis Personae or Cast of Principal Characters at the beginning of the novel. Again, this is something I particularly relish when I’m reading for my own pleasure, and in my books it’s been a way of signalling to a potential reader that there is humour in the story. Jilly Cooper has been doing this successfully for years and my reasoning is that if it’s good enough for those terrific best-selling authors, it’s certainly good enough for me!

I’m not giving away all the secrets, allusions and references in my books but would be delighted to hear from readers if they spot them!
Posted by Nicola Slade at 9:53 AM No comments:

A Fistful of Legends 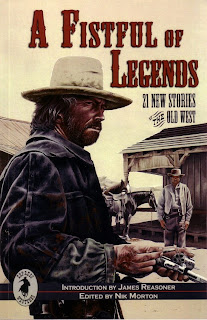 Introduction by James Reasoner, author of over 200 books. 21 new stories of the Old West edited by Nik Morton.

Revenge, retribution, and deceit. Damaged men and sinister night stalkers. Humor, irony, and tears. Bank robberies, showdowns, and lynchings. Tragic doves, plucky homemakers, and gun-toting belles. Birth and death, love and hate….
You’ll find it all here, penned by seasoned Western scribes and a few newcomers, too.
So saddle up for action and adventure … and grab yourself A Fistful of Legends!

Although this book isn’t from Hale, it deserves to receive a mention here for a number of reasons. Many of the writers featured are Black Horse Western authors, and some of their books are highlighted in the author biographies. The dedication is to ‘Robert Hale Ltd, publisher of the Black Horse Westerns imprint, for keeping the spirit of the Old West alive.’ The back pages, besides advertising a number of related western websites and blogs, also advertise six BHWs currently still available from halebooks.com.

As James Reasoner says, 'Western fiction has a tremendous power to entertain... As a reader, I count myself extremely fortunate that there are authors like these to spin such wonderful yarns and provide hours of solid entertainment. And as a Western author, I’m very pleased to count them among my friends and comrades who are upholding a long, proud tradition.'

Recently I interviewed Nikki Edwards for the forthcoming Black Horse weekend on my blog, The Tainted Archive. In the course of the interview some interesting details were revealed about Hale's plans regarding eBooks. Check it out HERE.

The full interview will be posted as part of the Black Horse Weekend starting Jan 29th 2010
Posted by Gary Dobbs/Jack Martin at 11:42 AM 3 comments:

First Review for Death is the Cure

The first review for Death is the Cure has arrived and it's a lovely one! Thank you, Geranium Cat (well known book blogger). I'm so pleased she enjoyed the book and very grateful for her perceptive comments.

DEATH IS THE CURE by Nicola Slade
Nicola Slade does atmosphere well; a short way into Death is the Cure I became aware that she had caught the buzz of the Pump Rooms in Bath exactly, and I was there with Charlotte Richmond and her friends as they tried the (revolting) spa waters. Charlotte, a young widow, has accompanied her dear friend Elaine to Bath while she undergoes a Faraday cure, latest in the fashionable Victorian flirtation with electrical treatments. While Elaine is busy “sizzling”, as she puts it, Charlotte is at liberty, guidebook in hand, to explore the town – not so elegant as it had been in Jane Austen’s day, but especially interesting as she hopes there may be clues to her own background. For Charlotte is not quite the quiet and grieving widow she appears to be, but the daughter of a young woman transported to Australia and, while she would like to trace her mother’s origins, she is less than keen that they should be widely known. And she’s not alone – several of her fellow guests at the respectable Bath establishment where they are staying look uncomfortable when the sharp and inquisitive Mr Jonas Tibbins seems to suggest that they might have secrets. Before long, Charlotte stumbles across a body…

Charlotte is a very believable heroine – she is warm, practical, prone to giggles, and thoroughly good company. She’s not above considering her own interests when indulging in a bit of matchmaking, and quite prepared to admit that there are people she doesn’t like; indeed, she is thoroughly pragmatic about the other guests (inmates, as she drily thinks of them) and tolerant of – if amused by – their foibles. She and Elaine are quick to see the funny side, so that you know their company would be readily sought by the other guests – indeed, there is much of Jane Austen about these two women, in their intelligence and humour, but Charlotte is necessarily more modern and resourceful than Lizzy Bennet, used to living by her wits…hmm, perhaps more than a touch of the Heyer heroines, too?

This is the second time Charlotte has appeared – the first was in Murder Most Welcome – and I really look forward to her next foray into detection. With her independent spirit I can see her doing a good deal more travelling, her status as a widow giving her leeway to investigate all kinds of skulduggery, and you can be sure she’ll find allies (and readers!) wherever she goes.
Posted by Nicola Slade at 11:07 AM 3 comments: