Email ThisBlogThis!Share to TwitterShare to FacebookShare to Pinterest
Labels: Bestsellers

Review of 'The Rake's Challenge' by Rachel Hyde at Myshelf.com 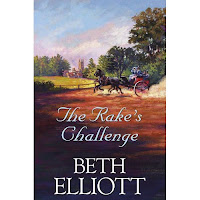 Reviewed by Rachel A Hyde

Anna Lawrence is not at all keen on life at home and runs away to emulate her hero Childe Harold. She hasn’t got far when she is molested by two young men intent on some “sport”, but is rescued by a mysterious stranger. This is none other than London’s most notorious rake Giles Maltravers, the Earl of Longwood and saving damsels in distress is not something he is normally associated with. But this young miss hardly out of the schoolroom awakens something in him and he is determined to protect her. Surely nothing amiss can happen once she is safely delivered to her place of employment as companion to an old lady?

Ms Elliott knows how to write just the kind of Regency romance I enjoy. Anna makes for a delightfully fresh and engaging heroine, whilst Giles manages not to be overbearing thus avoiding those endless bickering spats that have me closing the book in some romances. Instead this is a story where two people really do get to know – and like – each other and it is full of enjoyable moments. Anna’s new employers are Italians and are up to something underhand – what? Then there are descriptions of Brighton in its heyday and all the things that the ton did there. This is a relaxing, sunny treat of a novel with much to recommend it for fans of writers like Georgette Heyer.

Happy to report that Hale are to publish my latest novel, Young May Moon!
Sixteen year old May becomes the Punch & Judy Lady, fulfilling a promise
made to her late father, "Professor" Jas Jolley, and is assisted by her
lively young sister Pomona, who takes the leather bottle round the audience
on the sands at West Wick, in 1925. Four years before, from this same place,
their fiery mother Carmen, a flamenco dancer from Spain ran off with the preacher from
the rival entertainment , while Mr Punch cried out: That's the Way to Do It!

Other good news: I have a fifth memoir published on 1st November by Magna/Dales,
entitled Dancing in the Street, which indeed we did, on VE night... It covers the
In-Between years from 1942-50, in which I recall, among other things, dried egg,
doodlebugs, Disraeli and Daydreaming...

I'm a bit late this month with my monthly bestseller list. This time out the list is purely devoted to Kindle fiction.