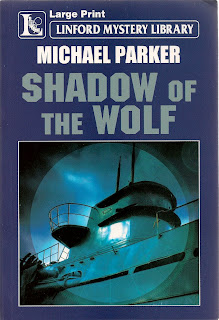 My second novel. SHADOW OF THE WOLF, which was first published in 1984 by Robert Hale, was released today by Ulverscroft in large print. Although in paperback, it's like having a new book released. When I approached John Hale about the possibility of reprinting the novel, he agreed to try Linford (Ulverscroft). Took him about a week. That's another title for my PLR list.
Posted by Michael Parker at 5:01 PM

That's a very eye-catching cover. I hope it does well. Congratulations on getting it published in LP.

While the extra money won't come amiss, I'm sure, Mick, I bet your best feeling is that the book is out there to be read again. I was able to read Mick's personal copy of the original hardback and can recommend this novel very highly. Great atmosphere and characters. If you don't buy it, then do borrow it from the library.