DUELLING IN BRITAIN IN THE NINETEENTH CENTURY 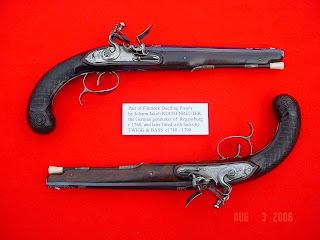 Once challenged, one could not refuse to meet one's challenger to a duel. Refusing meant loss of honour (unless of course one was the Duke of York. He was persuaded that because of his royal status, he could not possibly accept a challenge). Apologising was the safest way to avoid a duel. Of course pride and stubbornness often meant that an apology was neither sought nor offered.

There were many reasons for duels - a slight given, (oral or written, and often imaginary), political disagreement, religious disagreement and of course, love and adultery.

Daniel O'Connell, the Irish political leader struggling for Catholic emancipation, fought a duel in 1815 that affected him emotionally all of his life. A minor political figure, d'Esterre, took offence at O'Connell's description of the Dublin city government as 'beggarly'. Why the man constructed that as a personal insult, only he knows, but it should be noted that d'Esterre was a well-known duellist. No doubt the Protestant expected to get rid of the Catholic thorn in their side. O'Connell killed d'Esterre (it took the man two days to die), and O'Connell was devastated. In 1835 he 'insulted' Baron Alvanley and was challenged to a duel but declined. For the sake of the family's honour, his son took up the challenge. Shots were exchanged. No-one was hurt and honour was satisfied.

Even the Duke of Wellington fought a duel with Lord Winchilsea (over Catholic emancipation). It is interesting to note that according to the seconds the Duke missed, although history has it that he deloped (fired wide) and so did Winchilsea.

The object of the duel was not always to kill or wound one's opponent. Duels were about honour. The code duello was a set of standardised duelling rules used in Britain and Ireland. (These rules were also employed in the United States).

Juries did not convict duellists for murder into the 1840's. Up till then it was considered acceptable for those of the upper classes. Prior to the 19th century, duels were often carried out by swordsmen, but with the advent of the duelling pistol, pistols became more common.

Because duelling was 'illegal', the seconds (those who 'stood up for' the duellists, usually their friends), had to work secretly to set up the duel in an isolated place, usually at the crack of dawn while nobody was around. Hence the phrase 'pistols at dawn'. And what a business it was to load the flintlocks. You poured powder into the barrel and shoved a wad on top (usually made of paper) and dropped the ball on to that. Then you needed another wad to hold the ball in place. Then you flicked the frizzen to open the pan and poured a little powder into that just beside the touch-hole and closed the frizzen.

When you fired you pulled back the cock (trigger). The flint flew forward hitting the frizzen which shot forward creating sparks as it did so. As it dropped into the pan it set off the main charge. All very well if you prepared the pistol beforehand. Pity the poor soldiers who had flintlock muskets. Some soldiers became adept at loading and reloading and were able to do it twice a minute while under enemy fire.

Bernard Cornwell says four times per minute in his Sharpe series on the British Army during the Napoleonic wars. Dueling pistols, by the way, became works of art. Those by Henry Lapage of Belgium, for example. Military history is fascinating.